“Call a jack a jack. Call a spade a spade. But always call a whore a lady” by Patrick Rothfuss, The name of the wind.

Brave is the man who loves the woman for her heart and not her body. We have so many un discussed evils in society. Prostitution being one of them is an ancient theory of selling the sexual services for money. The services of rendering sexual activities have seen its step coming from the ancient times. We had our very own nagar vadhu amarpali form vaishali who adopted budhism later which has its root in the book “aajat satru”. Aryan ruler of India followed the system of celestial court and developed the system of guest prostitution. They were also offered as ransom to the victor to part with his most beloved prostitute. Empires fell and came up for her sake.

In south india they were known as devdasi and in north india as mukhies. The devadasi cultural was very relevant where the girls were married to the gods. Later used in flesh trade. They were allowed to enter the bond of matrimony. This shows that prostitution thrived in india since the ancient ages. Due to the grave economic distress,they had no choice but to take the recourse to the laziest of all trade, the trade of sex. Social disability and economic hardship have led the woman to adopt the profession.

Prostitution isn’t called the oldest profession in the world without reason. In the ancient times, courtesans occupied places of regal status in the kingdoms, something which seems to have trickled down to a horribly poor and extremely difficult-to-escape state of affairs in India today.

Whether it’s because of tradition or a society where that is the only means of income, there are places in India where prostitution is a widely accepted and sometimes the only form of livelihood. Some places are Natpurwa, Uttar Pradesh, Devdasis of Karnataka, Wadia, Gujarat and The Bachara Tribe of Madhya Pradesh. Prostitution prevails in society for man and woman both, but the only difference is man do it out of unemployment and lack of choice and woman do it because they are abducted and forced to get into flesh trade. After a survey in India was found the reason for this was poverty unemployment lack of options, stigma and adverse social activities etc. About one quarter of India’s population comprises of girl children up to the age of 19 years. However, they are discriminated socially, psychologically, economically and sexually. This gender discrimination is socially defined and continues from cradle to grave. One of India’s most striking characteristics is its material poverty.

But to my belief there is a very important reason and that is the love for sex, love for women’s body. The view of women as commodity is persuasive in popular manifestations of Hindustan culture in India.

The reason for choosing prostitution is fate and uncanny situations. No woman wants to sell her body for money and to be looked down upon. We as society outcaste them. We believe ourselves to be pure and pious but are we?

Why do we tend to forget that we are directly and indirectly push them to do something so disgraceful. We as people promote it.

Man wants different woman to sleep every night why so, why so much of inhuman treatment? Why are we losing our moral values? When sati was abolished why wasn’t prostitution? Isn’t that a social evil too? It’s the grave social evil in our society to disrespect the woman as weaker sex. We as responsible youth should educate people regarding this evil practice. The world won’t progress if the woman and children are traded for flesh. The laws need to be more crucial for human trafficking which has become a trade in India.

We need to take a stand on our moral values before we lose our mortality. 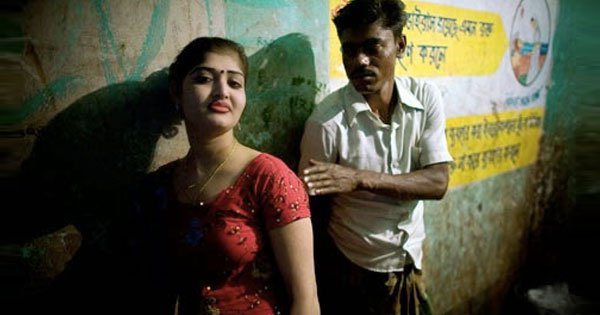 She is mother
She is sister
She is wife
She is life
She is light
She is nature
She has love
She has dream too
She is creative
She is beautiful too
Besides all the above
She is a prostitute too.

You abuse her
You hate her
You scold her
You leave her,
In the dark world,
You title her ‘Harpy’
You say her worse life,
To your all now,
She is a prostitute.

Hey GOD! , I confess,
On behalf of this gentle society,
I confess my sin to make her so.
Judge yourself man,
Who suits in that burning hell?
Isn’t that me, you, us, the lusty man?
Or that lady, who was born innocent?
But now to all of these society,
She is a prostitute…..

And this is what happens with a newly born baby girl ...

We call India as the land of HONOUR, RESPECT, HUMANITY, RITUALS, and blah blah ... but what a shame ... people still think Girls are curse to them, they desire for only Boy. Feeling upset, with the pathetic condition of the mentality of the people of this beautiful mother land INDIA.

THEY ALL CALL india AS MOTHER LAND, BUT STILL THEY DON't KNOW HOW TO respect WOMANITY...

But what are we all doing about it.The above all said is true and we all should make sure that we change the our mindset and as well as other peoples mindset. BE THE CHANGE TO SEE THE CHANGE.

Your initiative of a dedicated domain for all the WOMAN who work 24x7 for the happiness of their family, is a great thought to start with. It's time for equal opportunity and respect for WOMAN as well.

You will find at least 1 out of 10 people who will support you for the cause. If not now, but later in the future, more than 5 out of 10 will support your cause, and that's for sure. Because, we are there because of our MOTHER. Respect WOMAN, Respect HUMANITY ...

Please keep doing the splendid work of spreading awarness to our RESERVED society ...

thank you so much @mohit i hope one day ill be able to make a difference though i am playing my role. i hope people come out to play their role also and being a part better society.

The prostitution word is not new, nor is this profession new, it is coming from ancient age.  A question arises, “ Why do Women accept this profession and men go to them?”

In reality, this “oldest profession” falls into several categories. Yes, there are the street walkers whose lives are awful. However, there are also those women who provide sexual favors in massage parlors, small hotels and out of their own apartments. At the end of the spectrum are those women who are escorts or professional sex workers. Often, they work for themselves and charge sums of money that can run into thousands of dollars for a night out. Sometimes their clients are politicians, sports figures, and Hollywood/Bollywood movie stars, businessmen.

So this prostitution has taken a shape of Business, and those Dalals (middlemen) engaged in this, found it easiest way to become rich.

So we should start fight against these middlemen, who are pushing a woman into this darkness.

Why do women become sex workers, and why do men go to them?

The Women: Written by : Susannah Breslin

Let me preface this by saying I grew up in a well-to-do family. I had more opportunity and privilege than most, but the divorce of my parents in my first year of university ultimately drove me to completely check out of society.

In the beginning of my crack addiction I always swore to myself and to anyone who brought up the subject that I would never sell sex for money. Unfortunately, I was very naive and uninformed about the progression of addiction and I did not yet know what desperation felt like.

I do not remember my first trick, but I do remember many. I have had sex with as many as 12 men in a day. The busiest times were early in the morning when white men in business suits were on their way to work, or during lunch time when they could sneak off for a quickie.

for more reading, visit her page at http://www.theguardian.com/society/2011/aug/05/payoff-sex-workers-clients-stories

I was very happy to uncover this web site. I need to to thank you for ones time due to this fantastic read!! I definitely savored every part of it and I have you saved to fav to see new things on your site.

Thank you, sir, for your subtle comment. Do keep reading. I am more than obliged.

An outstanding share! I have just forwarded this onto a co-worker who was conducting a little research on this. And he actually ordered me lunch because I found it for him... lol. So allow me to reword this.... Thanks for the meal!! But yeah, thanks for spending time to discuss this matter here on your web site.

Do you have any tips for writing articles? That's where I constantly battle and also I simply wind up gazing empty display for long time.

Hello, I read your blogs on a regular basis. Your story-telling style is witty, keep it up!

What's up colleagues, how is everything, and what you would like to say regarding this piece of writing, in my view its actually remarkable in support of me.

Valuable info. Lucky me I discovered your site accidentally, and I am stunned why this accident did not took place earlier! I bookmarked it.

I take pleasure in, lead to I found exactly what I was having a look for. You have ended my 4 day lengthy hunt! God Bless you man. Have a nice day. Bye

I always spent my half an hour to read this blog's articles daily along with a cup of coffee.

This piece of writing will help the internet people for building up new blog or even a blog from start to end.

you are really a excellent webmaster. The website loading speed is incredible. It seems that you are doing any distinctive trick. In addition, The contents are masterpiece. you have performed a fantastic activity on this topic!

Wow, that's what I was looking for, what a stuff! existing here at this weblog, thanks admin of this site.

Greetings from Idaho! I'm bored at work so I decided to browse your site on my iphone during lunch break. I enjoy the information you present here and can't wait to take a look when I get home. I'm shocked at how quick your blog loaded on my phone .. I'm not even using WIFI, just 3G .. Anyhow, very good blog! adreamoftrains web hosting services

Thanks for your marvelous posting! I certainly enjoyed reading it, you're a great author. I will make certain to bookmark your blog and will often come back in the foreseeable future. I want to encourage you to definitely continue your great writing, have a nice holiday weekend!

I was curious if you ever considered changing the page layout of your website? Its very well written; I love what youve got to say. But maybe you could a little more in the way of content so people could connect with it better. Youve got an awful lot of text for only having one or 2 images. Maybe you could space it out better?

What's up everyone, it's my first visit at this web site, and article is really fruitful in favor of me, keep up posting these types of posts. adreamoftrains hosting services